So commit yourselves wholeheartedly to these words of mine.  Tie them to your hands and wear them on your forehead as reminders.

The first story was about the first English novel, Robinson Crusoe by Daniel DeFoe.  Defoe tells of a man’s shipwreck on a deserted island and his subsequent adventures, most notably, a time when he feels the presence of someone walking alongside him through his troubles.  He realized it was God.

The second story was about  Dr. Samuel Annesely, a scholar and dissenter of the established church of England.  He spoke at Daniel Dafoe’s funeral, which was held in St. Paul’s Cathedral in London, pictured below.  He had a very large large family, 25 children, and educated the girls and the boys, something that was highly unusual in that time.

The third story was about Susanna Wesley, who is often referred to as the mother of Methodism.  She had a very hard life as her husband, Samuel, a pastor, was often in trouble for being poor and a dissenter of the established church.  Susanna educated all of her children.  Her two youngest sons, John and Charles, ultimately founded the Methodist church and wrote hymn, many of which are still used today.

Rev. Leeds concluded by saying that we all have stories of faith and the only way anyone will know about them, is if we tell them.

We do not have the full text of the sermon.  If you missed this week’s service and wish to view it on DVD, please contact the church office at 231-798-2181 or lakeharbor@aol.com. 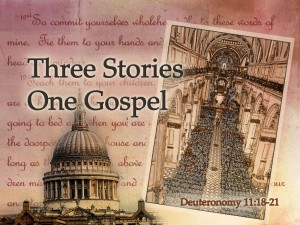